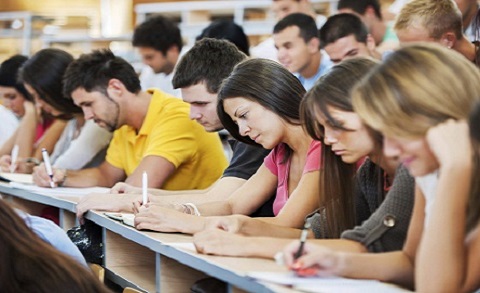 IELTS stands for International English Language Testing System. IELTS has worldwide acceptance. A lot of non-native English speakers apply for study or permanent residence each year to the countries where English is considered the first language. The countries such as Canada, Australia, New Zealand, UK, and the USA that bear influx of a great number of students and immigrants require their applicants to undergo English Language Proficiency tests like IELTS. There are two forms of this test-academic and general. Those who are intending to study in English speaking countries opt for Academic Module While immigrants choose the General Module.

How many sections are there?

There are four sections-

Listening: This test takes around 30 minutes.

IELTS Listening test lasts for about 30 minutes. It consists of four sections, played on cassette tape, in order of increasing difficulty. Each section might be a dialogue or a monologue. The test is played once only, and the questions for each section must be answered while listening, although time is given for students to check their answers.

IELTS Reading test lasts for 60 minutes. Students are given an Academic Reading test or a General Training Reading test. Both tests consist of three sections, and in both tests, the sections are in order of increasing difficulty.

IELTS Writing test also lasts for 60 minutes. Again, students take either an Academic Module or a General Training Module. Students must perform two writing tasks, which require different styles of writing. There is no choice of question topics.

IELTS Speaking test consists of a one-to-one interview with a specially trained examiner. The interview is recorded and has three separate parts:

Why do so many test-takers fail and how to conquer this test?

Many test-takers fail this exam owing to many different reasons. First of all, most test-takers learn tips and hacks only. Secondly, they do not practice before appearing for the test. Thirdly, they do not properly learn the skills needed to pass the test. Moreover, a vast majority of test-takers do not have them evaluated to see what their weakness are and how to deal with them. Also, they assume IELTS just a test of communication.

To conquer this test, I firmly believe that test takers are required to improve their four communication skills such as reading, writing, listening and speaking.

Many think that this test can be aced by shout-cuts and hacks. Nonetheless, this myth can easily be debunked when you appeared for the test with a few tips. I believe , you can only meet the success if you have sufficient language knowledge and good command on all four sections of the English language.

How can I improve the four skills?

Let me make it clear first, tips and hacks sometimes work, but this is not the only tool that you need to work on. The test-takers have to delve into the extensive learning practices. They have to absorb these skills. They should do a lot of practice.

Take the case of illustration, if you want to build a muscular physique, you have to undergo exercises and take the right diet and follow a strong regimen. After a lot of exercises, you become able to see the positive changes in your body. Your efforts have transformed you. Think of any short-cuts to your physique building goals. Undoubtedly, the short-cuts would do nothing and in some cases, hacks might ruin you.

In the same way, if you want to improve your skills, first learn, and they do a lot of practice to master your skills.